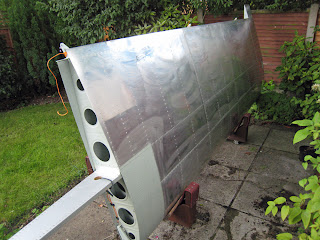 Good productive day and managed to close out the lower left wing tip that means my first wing is finished and stored outside in the wing stand. I need to wrap the wing a little better for long term external storage but I'm very happy to have got this far in 98 hours and 05 minutes or 69 days working on the first wing, although I haven't worked non stop as the whole process is supposed to be fun and not a race.

Clearly I have to decide if I have time to build the right wing as I maybe moving house in October depending on the work situation or lack of work situation..... I imagine the right wing build will be a lot quicker as I have most of the metal primed bar 7 replacement ribs and the skins plus I don't intend to make the mistakes I made on the first wing which led to a fair amount of repair work. I also have to consider my IMC training as that is taking up a fair amount of time and I know need to study for the ground exam but I will have a good think and decide what's possible.

One of the largest challenges of the wing build was bending the wing tip tabs to the correct angles but with a little effort and dinning room table as a flat work surface the whole process went well, very much a case of take you time and do it right. I'm learning the hard way that mistakes cost money so the less made the better!!

Tomorrow I intend to tidy the workshop some more before preparing the replacement ribs and getting the remaining skins out of there crate and blowing some primer on them. I'll probably have to buy some more JC5A as I have about a third of the first tube left (remember I'm dipping every pop rivet in the stuff around 4,000-5,000 to date) and I'll also be into my 2nd 5 litre can of primer soon.
Posted by Jason at 20:45 No comments: