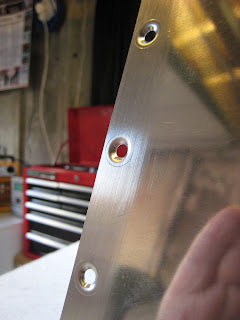 2nd March - Spring has arrived and its warming up a little. I spent 5 enjoyable hours working in the garage today and achieved a lot building a drill press that now sits on top of the tumble drier I also had my first build issue but I'm not alone according to the Vans Air Force forum.

Basically my Vertical Stabilizer has a dodgy rib (VS1208 for those that have plans) its pre drill holes do not line up so I took some photos and emailed them to Vans who replied really quickly and are shipping a replacement to me so that means I can't prime the prepared metal until it arrives but at least when it does I'll be able to do the prep on it and see some serious progress quite quickly. I've posted more photos online

So far I've done around 13 and a half hours on the project and am getting more comfortable using the tools and working with the material. Whilst I await the new rib I will start work on the next step which is the rudder.

5th March - Spent a sneaky hour and a half in the garage working on metal prep for the rubber assembly and that's all done now so it's ready for drilling and preparing tomorrow. I really believe you can build the rudder in a weekend if you put your mind to it and that's my plan although I will probably hold off priming until the faulty rib is replaced..... Unless I decide to learn a new skill over the weekend?
Posted by Jason at 20:07 No comments: