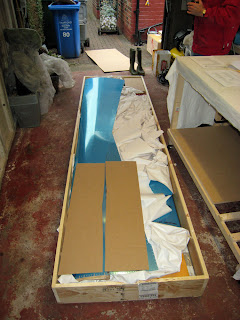 Friday 5th February was the day I paid the shipping and import costs for my RV-12 kit... Well the first bit of it anyway!! A builders tool kit from Avery, an Empennage kit from Van's, a toolbox project kit to get me underway and 12,500 rivets.

I spent the weekend sorted a van out to collect my kit around lunchtime on Monday 8th February from Manchester International Airport and my kit has already been to Portland, San Francisco, LA, London Heathrow and Manchester so its well travelled already. After checking the crate contents (only one small washer missing) it was time for tea and then for me to go to work, I think doing the the 10pm-1am shift will work well when the build gets underway. Tuesday arrived and I did the paperwork for the LAA (Light Aircraft Associaition) and later that week a project number arrived so its officially registered I just need the paperwork and then I can get my inspector around to check my workshop over.

Thursday 11th - Went flying in my shared C127 G-AWVA first flight of the New Year and I was a little rusty in the circuit to be honest.

Friday 12th - I drove to Hook in Hampshire to have a build lesson with my friend Tim who's build a lovely RV-7 and has another project underway in his workshop. Whilst the boys talked planes and building Jo (Tim's better half) looked after the boys with food and beverages.

Saturday 13th - Sent most of the day building the toolbox and having other important lessons from Tim, sadly we didn't have time to do any spraying but its an excuse for them to come up here once I get underway properly.

Sunday 14th - I had a romantic Valentines day ordering additional tools like stop drills, a centre punch and a couple of other things Tim had and I consider useful for the build. I'm also thinking my air drill might be too big but I'll wait and see if that's the case before sourcing an alternative. Went to B&Q and got an extension lead so plenty of power sockets in the workshop now. I also sorted all the bags of rivets, washers, bearing etc into plastic cases so a productive afternoon.

Monday 15th - Checked over my compressor and sorted out how the regulator works and applied to the CAA for a registration mark...... More as and when it's approved

Tuesday 16th - Workshop heater arrived a stolen idea from Tim's and a sensible one as it gets rather cold in my garage at the moment. Sourced material from spray table

Wednesday 23rd - Decided to prep some metal whilst waiting for approval to start the build proper from the LAA so split some brackets and made them look nice. I also ordered a Scotch Brite wheel from Vans and a pillar drill from the internet as I can already see the benefits of having both to hand. It's fair to say I have plenty of tools now but the hardest thing to find so far are soft jaws for my vice but luckily Amazon had so that should save a few teeth marks along the way. I've also decided as well as priming the internal surfaces of the build I'll be using JC5A which is a jointing compound on all external rivets to help prevent corrosion in the longer term, this stuff comes in a toothpaste sized tube and costs £40 a go so will be keeping that under lock and key

Thursday 25th - Postie drops off dark blue folder from the LAA so I'm good to go although the projects serial number has changed from what they initially told me so been on to the CAA to get my registration certificate amended which isn't a big problem. I also called Nigel my local inspector and hopefully he'll come over tomorrow night to inspect me, my kit and my workshop

Friday 26th - I HAVE APPROVAL TO START BUILD!!! It's all systems go

Saturday 27th - Spent 6 hours in the workshop today drilling, deburring etc etc so the build is underway and already I have some pieces of metal to show for my efforts. I had one small issue with the countersinking tool and not being able use it in the drill in one location so I removed the head and screwed it into at a hand deburring tool and did it manually. I also starting fluting some of the VS ribs and suspect this is going to be a black art to get right
Posted by Jason at 12:05 No comments: