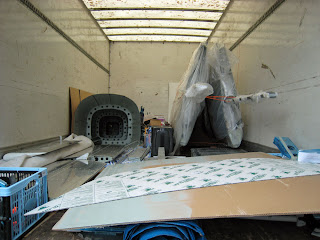 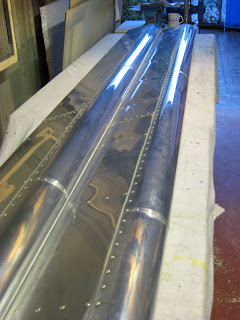 Busy day in the garage today with the sole aim of finishing the flaperons and I'm pleased to report I managed it.

The wing kit has taken me 162 hours and 55 minutes to finish and brings the total build time so far to around 285 hours. My next challenge is to move the completed wings, empennage and associated parts to my folks house in Wales which I will do next Tuesday with the help of friends and a rather large lorry as at 15 feet+ plus long for each wing won't fit in your average transit van! Once settled in my temporary home I'll crack on with the fuselage kit and hopefully my Dad will be on hand to help as well which means thinks should move along a little quicker. Nigel my LAA inspector has also agreed to continue on the project as well which I’m pleased about as I hope I’ve gained his trust and he seems happy with the quality of my workmanship.

I will also start studying for the ATPL exams properly after the move as I've invested in Module 1 of a course from Bristol Groundschool and I aim to split my time between the two things whilst job huntint, so plenty to go at over the next few months.
Posted by Jason at 20:19 No comments: 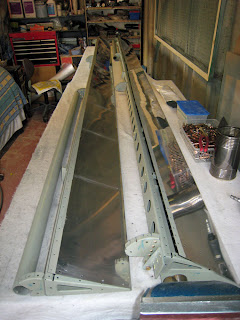 Interesting day for me as I’m sat at hope waiting for a courier to arrive and deliver my latest wine order (which is nice) and another to arrive with my first module for the ATPL exams!!! Been considering starting to study for them since gaining my PPL and with the IMC rating in the bag and the build moving along I decided that’s what I must do next, plus the fact I don’t have any work beyond the end of October I need to have something positive to do each day and a reason to get out of bed each morning.

I’m also hoping to move the aeroplane in the next couple of weeks as I leave this house mid November so its needs to go to its new home...... Still not 100% where that is mind you as a phone call and job offer will change everything last minute - All very exciting and at times quite annoying!!

Managed a couple of hours on the build today and now have the flaperons half skinned and ready for inspection by Nigel my LAA Inspector so hopefully he’ll be over tomorrow or Thursday then it’s finish skinning them, then get them and the wings finally inspected in the daylight and I’ve done as much as I can before the move. My aim was to have the wing kit finished before the move and then its on to the fuselage which is sitting in my garage right now and I have a dilemma do I order the finish kit when I start that or hold off until the work situation is resolved? I always wanted to keep the plane to myself but grouping it may be the only way to fund the continuation of the project......... Some serious chats with my money man once everything settles down in a few weeks.
Posted by Jason at 16:29 No comments: 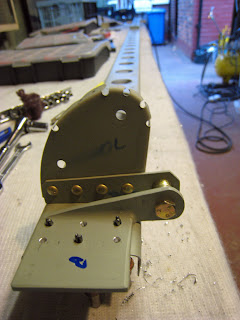 Quick hour and 40 minutes on the build and marked the start of construction of the flaperons after all the preparation. I was a bit rusty using the squeezer on the solid rivets but all went well and I now have all the actuation brackets match drilled and ready to be attached properly.

I aim to have the flaperons completed in the next couple of weeks as the clock is ticking for my move away from Manchester and it would be great to get the flaperons and wings finally inspected and signed off by Nigel my LAA inspector before I leave then I have to find a new guy to take over the inspection process.

It’s been a busy week having driven over 600 miles in just over 24 hours this week as I had an interview on the south coast earlier this week but have nothing to report on the work front currently and I’m also considering life after radio as it seems likely that finding a decent radio job in the current climate might prove difficult. I also managed to fly yesterday with my Dad in my group C172 for the first time since its accident along with my friend John in a Eurostar, to say it was a little hazy would have been an understatement but an enjoyable and challenging time had by all and my new IMC skills came in handy as we climbed through cloud and the visibility dropped at times to around 3km especially heading into the sun.
Posted by Jason at 18:51 No comments: 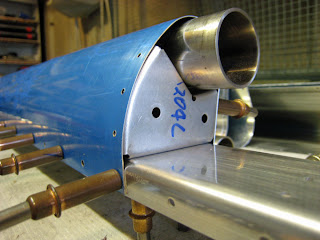 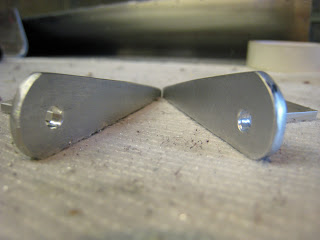 One tricky thing was drilling the hole in the bracket as it called for a 03/16 drill that I didn’t have or at least that’s what I thought, a quick trip to the local diy shop revealed a 03/16 drill is a No.8 or 5mm in new money which I already had so a couple of quid saved on this step.
Posted by Jason at 18:01 No comments:

A Couple Of Hours Outside Turned Into Four 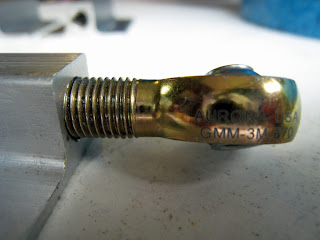 Today I decided to go out to the garage and work on preparing the remaining 4 flaperon skins which went well and now they are all ready to prime so progress made. I also decided to tackle preparing the flaperon pivot brackets and the actuation brackets from raw aluminum - Pivot brackets went well still researching the best method to do the actuation brakcets....... Don't wanna get them wrong as I've given USP and Vans enough money for replacement parts!!

Used the drill press today in anger for the first time and pleased with how it performed and held everything in place whilst I drilled out the holes prior to threading them, amazing how having the right tools makes things go better. My birthday comes up next month so will probably ask for some cash towards a band saw, bit of a luxury I know but a good addition to the workshop all the same.

I reckon today might be my only chance to get on with the build this week as I have flying lessons twice this week IMC test prep hopefully if I fly the ILS well and I have time away lined up this coming weekend, plus need to invest time trying to find another job as that's not really happening right now!
Posted by Jason at 17:50 1 comment: