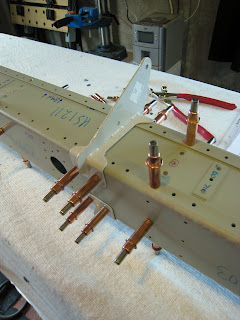 Been a busy week with one thing and another going on but managed a fair bit of time working on metal prep for the horizontal stabilator.

Total time on the build so far 52 hours in just over a month so making nice progress and currently have 4 parts that are half riveted and awaiting final inspection by Nigel before I seal them up for good. I will invited him over once I've finished the horizontal stabilator frame and then its onto the tailcone and I aim to have the Empennage / Tailcone kits finished but the time the Fuselage and Wings arrive probably late April or early May...... That's the plan at least!!
Posted by Jason at 19:33 No comments: